Can You Convert a Diesel Truck Into An Electric One? 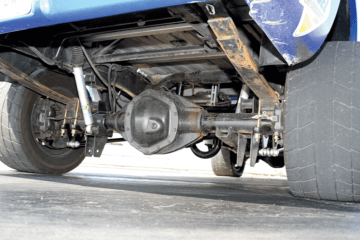 Global warming is not just limited to SUVs and cars. It has started to become a problem with diesel trucks too. They say a single step towards betterment is all you have to take to cover a journey stretched over a thousand miles. Electric vehicles (EVs) are now available in the market that are helping magnanimously combat the environmental crisis. Commercial diesel trucks are one of the primary contributors to global warming and climate change. These massive beasts burn a lot of fuel and produce many harmful emissions.

The transportation sector is responsible for about a quarter of the greenhouse gas emissions in the US. Out of which, heavy-duty vehicles like trucks contribute almost 60%. Diesel trucks are a concern because they produce more harmful emissions than gasoline-powered vehicles. So is there a way to resolve this problem? Is there such a concept of hybrid or electric trucks? Can we convert a diesel truck into an electric one?

READ: Can Old Cars Be Converted To Electric Vehicles?

What Are the Benefits of Changing an Old Diesel Truck to an Electric Vehicle?

When it comes to converting an old diesel truck into a new one, there are several questions that one might ponder. Is it going to be beneficial for the environment? What about the initial investment? How much time and money will it take to get the job done?

But rest assured, converting an old vehicle into an electric one has many benefits.

You Won't Ever Have to Worry About Fueling Up Again

One of the best things about electric vehicles is that you never have to worry about fueling them up again. With the cost of fuel on the rise, it doesn't look like it will go down anytime soon. Having an electric car will give you the absolute liberty of never getting stuck with fueling your car. It'll also save you a lot of money in the long run.

No More Emissions From Your Vehicle

You Can Use Renewable Energy to Power Your Vehicle

An electric-powered four-wheeler requires less maintenance than a normal car powered up on fuel. This is because there are no moving parts in an electric vehicle, which means there's very little that can go wrong. You'll encounter problems such as flat batteries and blown tires, but they're all part and parcel of driving any vehicle.

Contributing to a More Sustainable Future

Electric vehicles are a great option whether you're looking to save money or do your bit for the environment. They're powered by renewable energy sources and produce zero emissions. What's even better about owning these vehicle types is that it contributes to a more sustainable future.

Electric vehicles are the future. And it's not just a fad that'll eventually die out. It's a sustainable mode of transportation that doesn't negatively impact the environment. Are you a truck owner? so, if you're looking to do your bit for the environment or save some money on transportation, you can always think about converting your old diesel truck into an electric vehicle.

What is The Average Distance An Electric Car Can Cover In a Single Charge?

An electric car can cover 200 miles on average on a single charge. However, this number will differ depending on the make and model of the car as well as the type of batteries used. 200 miles is an approximate distance you can keep in mind while driving without worrying about experiencing a vehicle breakdown anytime soon.

How Long Does It Take To Charge An Electric Car?

It usually takes between 4 to 8 hours to charge an electric car. However, this number can differ based on the make and model of the car as well as the type of charger used. It's important to remember that electric cars require a different type of charger than traditional vehicles.

How Much Does It Cost to Replace an Electric Car Battery?

The cost of replacing an electric car battery will differ based on the make and model of the car. However, on average, it costs between $5000 to $20,000.

READ: How Much Does It Cost to Replace Electric Car Battery

Electric vehicles are the future. Many diesel truck owners are now considering putting their investments in electric trucks. If you're looking for an eco-friendly and sustainable mode of transportation, then an electric car is the way. They help you save money on maintenance as well as fuel costs. Additionally, electric cars produce zero emissions and don't become a burden on the owner.