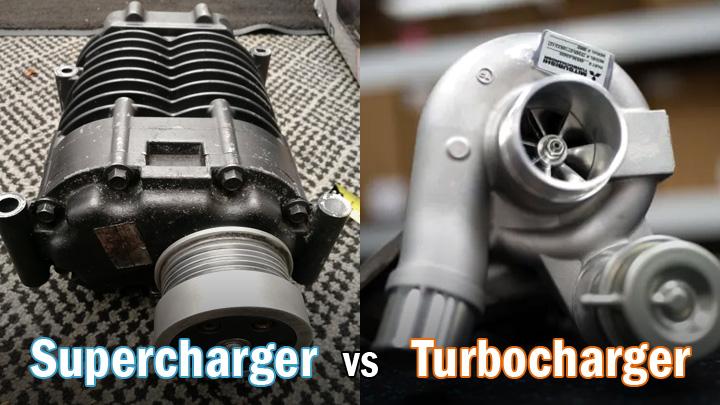 Many people get confused with turbochargers and superchargers, thinking they are the same. But while they can both be used to boost cars in terms of speed and performance, they are different chargers with their own pros and cons.

Turbocharger vs Supercharger: What’s The Difference?

The main difference between a turbocharger vs supercharger is their energy source. Let’s go through the major differences:

What Is A Turbocharger?

A turbocharger is powered by an exhaust gas turbine with two fans, a turbine fan, and a compressor fan. As the small engine turbos spin, they hear up the air, which is why turbocharged engines or turbo cars have intercoolers to cool down the turbo-compressed air.

In addition, turbochargers work with the engine's waste gases, making them more fuel-efficient. Turbos are compatible with any naturally aspirated engines as well as internal combustion engine cars.

What Is A Supercharger?

A supercharger is powered by the engine directly via the crankshaft. The compressor fan rotates with the help of gears driven by the pulley belt, which compresses air and brings in more oxygen to the engine. One of the downsides is that a supercharger requires engine power to operate, resulting in less fuel efficiency.

While mechanical superchargers are still common today, they may not be in the years or decades to come. We’re seeing a huge shift to electric, with the rising popularity of the electric turbo and the electric motor.

Although a supercharger is generally standard for most racing cars, you can always add superchargers to any vehicle. Just ensure that your car engine is suitable for supercharging and that you choose the right supercharger for your engine.

An engine needs extra power to pull a heavy load or accelerate faster. By adding either a turbocharger or a supercharger to your engines, you can improve engine performance in terms of horsepower and torque. Below is a breakdown of how much hp each type can produce.

How Much Horsepower Does A Turbocharger Produce?

Turbochargers allow small engines to breathe more and produce big power. For example, 6 to 8 pounds of boost air pressure over a naturally aspirated engine can result in a power increase of 15 to 25% or more. When it comes to horsepower, a turbocharged engine can gain 70 to 150 extra power.

How Much Horsepower Does A Supercharger Produce?

A supercharged engine can produce a boost right away at a low RPM as it is directly from the engine's crankshaft. Superchargers on normally aspirated engines can create an extra 50 to 100 horsepower.

Turbocharger vs Supercharger: Pros And Cons

A turbocharger vs supercharger come at different price points, with turbochargers often being much more affordable. Here’s the key difference between the two in terms of cost:

A turbocharger's price starts around $400, but the price may vary depending on the make and model of the vehicle. However, turbochargers require additional components to support the extra power on non-turbo cars These other components include but are not limited to the following: intake piping, boost controller, intercooler, downpipe, knock sensor, spark plugs, and high capacity fuel pumps.

Starting at around $1500, superchargers tend to be more expensive than turbochargers. Nowadays, superchargers are not mass-produced – as most new automobiles do not include a supercharger, they are custom-made for each engine. Thus, replacement parts can be pretty challenging to obtain.

Who Makes The Best Turbocharger And Supercharger?

There are numerous turbocharger vs supercharger engines in the market, so it might get a little confusing when deciding which brand is the most reliable and trusted. Below are some of the best brands for turbochargers and superchargers:

How Do I Prepare My Car Before Adding A Turbo?

Turbocharging can be a complicated process, considering all the parts and preparations you need before you can install a kit. Here are the five essential parts you need for turbocharging:

After comparing turbocharger vs supercharger, turbochargers have the upper hand in most use cases.

Despite the turbo lag, turbochargers deliver many efficient and better ways to improve one's engine. Superchargers have advantages, but they demand more from the engine to produce helpful boosts at low RPM. If you are still undecided, you can use both types of turbos simultaneously, also known as twin charging.

Either way, do proper research before converting your stock engine car into a turbo car. You can also browse the Road Cartel website for the best turbocharger and supercharger products on the market!