What Does LS Engine Stand For? 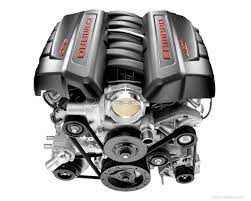 Do you enjoy driving fast cars with powerful engines? The LS engine might be right for you! The LS engine is found in many high-performance cars for a good reason – keep on reading to learn the basics of the LS engine, and its history, engine variation, horsepower gain, and more.

What Does LS Engine Stand For?

The term “LS engine,” short for Luxury Sport engine, started during the 3rd and 4th generation of the “small block Chevrolets”, a V-8 gasoline engine. The "LS" name came from the 3rd generation engine used in the Chevrolet Corvette with RPO code LS1.

Prior to the LS, previous engines came with the CL package, short for Custom Luxury. They were followed by the 5th generation small blocks known as LT engines, short for Luxury Touring. The LT engine general motors line falls just above the LS entry-level trims.

What Does LS6 Stand For?

Part of the LS family manufactured by General Motors during the early 2000s, LS6 stands for the “Luxury Sport 6”. The LS6 engine was initially only used in the C5 Corvette Z06 Model but later added to the Cadillac CTS V-Series.

The LS6 is a higher-output version of the LS1 engine, featuring better cylinder heads and a compression ratio of 10:5:1. The LS6 originally produced an impressive 385 horsepower, but this improved in 2002 to 405 hp.

In addition, GM engineers redesigned the engine to a more aggressive camshaft with increased lift and duration, a revised oiling system and water jacket design for better cooling and oil flow, and improved flowing intake. There are also changes to the injectors, valve springs, and sodium-filled exhaust valves for an overall higher-revving engine than LS1.

All About LS Engines

LS engines use electronic fuel injection and coil-over-plug ignition. All cars sold with LS engines are pushrod V8s with an aluminum block, while most trucks have a cast-iron block. While the LS engines are generally considered small blocks, some have big block displacement, such as the LSX 454 crate engine.

The LS engine is equipped with numerous upgrades compared to its predecessor. These include:

The LS engine gained popularity among engine swap enthusiasts for its combination of small package size, low cost, and high availability. So how did they do it?

The cam-in-block strategy combined with the excellent airflow from cylinder heads and intake manifold results in higher outputs in a smaller external package. General Motors also chose a pushrod motor over the more high-tech dual overhead cam, making their engine cheaper to manufacture and easier to install in various types of vehicles.

Because of these features, the LS motor created a cult-like fever – even garnering the slogan "LS Swap the World”.

LS swaps are a type of engine swap that uses engines from General Motors. Many LS swap enthusiasts enhance their vehicle's performance, base engine quality, and power by swapping their stock engine to an LS series type.

If you want to swap engines, you’ll need these parts:

If you are looking for swap engine parts that are reliable and affordable, browse the Road Cartel website! Also, get answers to common questions like “How much HP do headers add?” on our blog.

The LS engine family is a comprehensive spectrum of engines built under the General Motors line. The LS family includes LS-coded engines as well as a few with different engine codes, such as LM7, LM4, L59, LQ9. The Vortec series iron block late model truck engines are also included in the LS line.

Other notable engines that are part of the LS family are listed below:

As seen in the front-wheel-drive Chevrolet Impala SS and Pontiac Grand Prix GXP, the 5.3L LS4 engine has an aluminum block and a unique, low-profile front-end accessory system. It provides 303 horsepower and 323 pound-feet of torque.

The 6.0 LS engine is part of the Gen III small-block engine line, complete with iron heads that are perfect for truck engines. This engine produces 300-330 horsepower with a 9:4:1 compression and a torque rating of 360-370 ft./lbs.

This 6.2-liter LS3 engine produces 430 horsepower (376 cubic inches), making it the most powerful base Corvette engine in history. Furthermore, the LS3 block features larger bores and a more robust casting than the LS2, allowing it to accept more powerful 6.2L engines.

This LS engine is often used in high-end cars with outstanding performance, such as Chevrolet. Chevy LS engines refer mainly to the V8 engines for rear-wheel-drive cars, which are powerful, strong, and lightweight – making them the go-to swap engine for enthusiasts.

Introduced in 2005 as Corvette's new stock engine, the LS2 engine launched the Gen IV LS engines line. The LS2 engine comes in an all-aluminum design with a compression ratio of 10:9:1, a 3.62-inch stroke, 4” bore blocks, and redesigned flat-top pistons. This engine produces 400 horsepower, 400 pounds-feet of torque, and a 6500-rpm redline.

The Vortec HO is commonly used in Chevrolet engine line-up. Over the years, GM has created many versions of these engines, such as the Chevy L33 HO, a 5.3L four-stroke gasoline engine.

Because trucks are extremely popular in America, there are hundreds of thousands of these engines on the market. Aside from being affordable and accessible to all, they also offer reliable power output.

With the “LS” meaning Luxury Sport, the LS engine is designed for fast speeds and amazing performance – just like many high-end vehicles. There are many variations of LS engines, especially from the 3rd and 4th generations, such as LS1 and LS9.

LS engines are extremely popular because of their high performance, versatile design, aftermarket parts, and affordability. While these engines are a standard option for many cars, those who don’t have them and want to upgrade can do LS swaps for their current vehicles.

Visit Road Cartel’s website and browse through our products for your next engine swap!